police must wait outside while awaiting search warrant 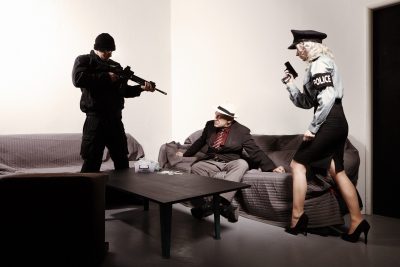 When police officers are effectuating an arrest warrant  they are not permitted to remain inside the residence to prevent the destruction of evidence while awaiting a search warrant once the arrestee and all other persons have been removed from the house, where they could have accomplished the same law enforcement goal of securing the premises from outside the residence with minimal privacy intrusion. The Court in Green v. United States, 231 A.3d 398 (2020)  held that when police remain the house after their right to be there pursuant to an arrest warrant (or a warrant exception expires) the Fourth Amendment requires the police to guard the premises from the outside while awaiting a search warrant, and if a person with a possessory interest over the premises chooses to enter, the police constitutionally may escort that person inside only to ensure he does not remove or destroy evidence.

In this case,  U.S. Marshals executed an arrest warrant for the defendant who was believed to be involved with a murder.  The Marshals made the arrest at his home, apparently when he opened the door to them, and at some point they entered the residence and removed the other persons who were there.   The police remained inside the defendant’s home.    The police had already cleared everyone from the house and were just waiting inside and were actually looking for the Defendant’s phone.    The Defendant’s lawyer argued that his Fourth Amendment rights were violated by the search of his home without a search warrant after the purpose of the arrest warrant had been satisfied, and by the seizure of his phone from his girlfriend “without the authorization of any warrant [and without] the justification of any exception to the warrant requirement.”

The DC Court of Appeals held that the police had violated the Defendant’s Fourth Amendment rights when after they arrested the Defendant they remained in his home for the purpose of “seiz[ing] the scene to make sure that they could locate any evidence that may be connected to the offense” after the issuance of a warrant.   Think about it.