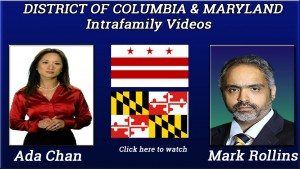 A police officer is required by law to make an arrest wherever the police officer has probable cause to believe that a person committed an intrafamily violence offense that resulted in harm.   It does not matter whether the offense was committed in the officer’s presence.  The officer will or shall we say is supposed to take detailed accounts of the victims state of mind, appearance etc.   In general when the police come to the house to deal with an intrafamily offense someone will probably be arrested.   Police officers also must make written reports of investigations of intrafamily violence offenses. The reports must be submitted to and maintained by the District of Columbia Metropolitan Police force.

After a temporary order is granted the judge will conduct a full hearing where both the petitioner and respondent are present and the Judge will take testimony to decide whether the respondent committed or threatened to commit a criminal offense against the petitioner.

The judge may issue a final protective order with any combination of the following provisions:

– The protective order will last for 1 year unless modified by parties.

Any person who violates a temporary or final protective order will be charged with violation of protection or contempt and be fined up to $1,000, sentenced to 180 days in jail, or both.

The other side of domestic law is that the United Attorney’s office may pursue criminal charges independent of the petitioner’s wishes.  In fact, the U.S. Attorneys views the petitioner as just a witness in their case against the Defendant.  The Court has a separate calendar, a boutique court, called Domestic Violence calendar where only domestic violence cases are prosecuted by the U.S. Attorney’s Office.  For more information download a free copy of our book.

Consult With a Lawyer

Allegations of intrafamily violence can result in criminal charges as well as affect your parental rights. If you face allegations of intrafamily violence in the District of Colombia, it is important that you speak with an attorney experienced in handling such matters. A skilled lawyer will protect your rights and guide you throughout the legal process. A skilled lawyer can evaluate your case, seek dismissal or a negotiated resolution, and represent you in front of a jury if your case proceeds to trial.