can the police pat me down without my consent

Violating Black Lives in the District of Columbia

A submission to a police “request” for a pat-down was not consensual but a “seizure,” 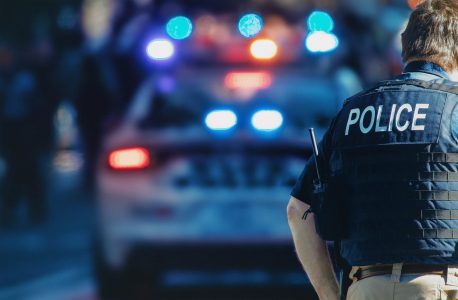 In light of the black lives movement – the Court of appeals recently addressed a case specifically addressing young black males in DC contact with the police.  As the Court stated in this opinion,  police in the District of Columbia will sometimes go to far and violate the rights of individuals in the hopes of recovering weapons on drugs from the individual.     The Court in Dozier v. United States, 220 A.3d 933 (D.C. 2019) held that where two police cars containing four officers pulled up to the alley and a Black man was walking alone at night in a “high crime area,” two armed, uniformed officers got out of their car, followed appellant, asked repeatedly if they could talk to him, asked if he had a weapon, and when he said no and lifted his jacket to  show “a clean waistband,” asked if they could pat him down for weapons – This was a violation of his 4th amendment right.

So what happened in this Case?

On the night of April 5, 2014, Officers were assigned to a foot patrol near the 6200 block of Dix Street, N.E, an area “known for … soliciting prostitution and drug activity.”

All four officers were in uniform and armed.   Around 8:45 p.m., they observed Mr. Dozier at the mouth of an alley on the 6200 block of Dix Street, walking out of the alley with another person.  Officer stopped Mr. Dozier because he was dressed in all black clothing,” and they “wanted to see what was going on during that time period.” There was no one else in the vicinity.

Officers asked Mr. Dozier whether he had “any illegal weapons on him.” He replied “no,” and also “lifted his jacket” to show “a clean waistband.”    An officer decided to pat him down and asked Mr. Dozier whether he could be patted down “for any weapons.”  He responded, “yes, you can check me.”    During the pat-down, the officer said he felt a “bulge” inside Mr. Dozier sock that was approximately the size of a crumpled up “ball of money.”   Mr. Dozier did not respond and then “pushed off” of the wall and ran away.

The officers chased Mr. Dozier and they witnessed him throwing the bag of drugs.  He was placed under arrest and charged with possession with intent to distribute drugs and thereafter convicted by a jury.   The Court of Appeals reversed the decision stating that stating it “is known from well-publicized and documented examples, an African-American man facing armed policemen would reasonably be especially apprehensive.”   Furthermore, Mr. Dozier was seized within the meaning of the Fourth Amendment by the time he complied with the officers’ request to put his hands on the alley wall so that they could pat him down.   The police did not have reasonable, articulable suspicion that he was engaged in criminal activity prior to the time he was told to put his hands against the wall.    The Court applied  the exclusionary rule,  concluding that the evidence, the officers’ testimony about Mr. Dozier’s flight and throwing motion, should be suppressed as the fruits of an illegal seizure.

Other Articles on stopped by the Police.